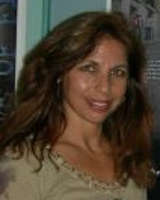 Robyn Symon is a two-time Emmy award-winning writer/producer specializing documentaries and television TV series. She has become known in the industry as the “transformational” filmmaker, putting a spotlight on people who make a difference in the world.

In 2007, Symon debuted the feature documentary “Transformation: The Life & Legacy of Werner Erhard.” At its New York premiere at the Quad Cinema, “Transformation” broke the box office record. The film and TV rights were acquired by Screen Media Films.

Symon’s documentary, “Hedy & Yumi: Crossing the Bridge” about relationship experts who turned their pain from the Holocaust into a global mission to create a ‘culture of connection won Best Documentary at the La Femme Film Fest in Los Angeles Symon produced the documentary YES: Young Entrepreneur’s Society (www.theyesmovie.com) and “One Week Job” following the journey of a Canadian college grad who gained international media attention searching for the perfect job (www.oneweekjob.com).

Symon is currently producing several projects including a documentary on two-time Nobel Peace Prize nominee SOMPOP Jantraka who is on a mission to prevent young girls from entering Asia’s sex trade (www.sompopfilm.com), “Grown Up Kidz” about a silent population of children forced to give up their childhood to become caregivers in their homes and “Behind the Blue Veil” about the nomadic Tuareg tribe of the Sahara Desert now facing extinction (www.behindtheblueveil.com).